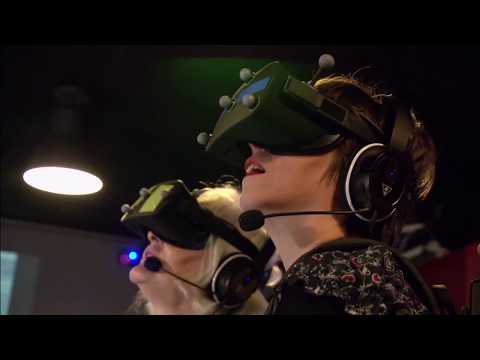 For the first time, a choreographer melds immersive virtual reality with dance to create a totally new sensorial experience.
In a career spanning 20 years, choreographer Gilles Jobin has always enjoyed injecting innovative technologies into dance. His new creation, VR_I, emerged from his encounter with the founders of Artanim, Caecilia Charbonnier and Sylvain Chagué, specialists in motion capture technology. Their work now allows audiences to experience dance in an immersive virtual reality. In groups of five, spectators equipped with a virtual reality headset and a computer move through evolving virtual scenes: an endless desert, a modern loft, an urban landscape. The immersive technology creates avatars of participants, allowing them to interact with each other, while miniature or giant virtual dancers swirl among them. VR_I won the prize for innovation and the audience award for best performance at the 2017 Nouveau Cinéma festival in Montreal, and it was also selected for the 2018 Sundance Film Festival.

Piece for 5 dancers
FAMILIES – age 8 and up

In partnership with the Théâtre Nouvelle Génération, CDN – Lyon

Born in 1964 in Morges, Gilles Jobin lives and works in Geneva.

He gained international acclaim for his very first choreographic piece for three dancers, A+B=X, which he created in 1997 at Arsenic art centre in Lausanne. It was presented two years later at the Montpellier Dance Festival.

In 1999, he produced Braindance, which opened the 2000-2001 season at Théâtre de la Ville in Paris. His radical artistic directions and international recognition made him a precursor among the new generation of European choreographers.

In 2006, he became associate artist of Bonlieu Scène Nationale in Annecy, France, where he created his subsequent productions until 2011. In March 2012, he was awarded the first Collide@CERN-Geneva prize in Dance and Performance for his proposal to explore through interventions and dance the relationship between mind and body at the world’s largest particle physics laboratory.

In 2015, he received the Swiss Grand Award for Dance for his contribution to the development of contemporary dance. Besides his own productions, Gilles Jobin has made his company’s headquarters, Studios 44, in Geneva, a pioneering place for promoting contemporary dance in Switzerland and for international professional exchanges, through various initiatives: daily training for dancers, educational activities, workshops, artistic residencies, as well as projects with countries from the Southern hemisphere, especially Africa and Latin America.

Go to the show